Bring the Bowling Alley to Your Basement Using Your Shuffleboard Table

There is something about the simplicity of most shuffleboard games that makes even first time players believe that they can beat seasoned veterans. But nothing is more satisfying for an experienced player than to mightily shut-down an overconfident first-timer.

The same thing can probably be said about bowling, which seems simple enough to the average observer. But, as anyone who has been schooled at either shuffleboard or bowling because they overestimated their own abilities can tell you, each game is deceptively hard given their generally simple premises. Although the rules to these activities may seem straightforward enough, sending a puck down a table that in some cases is more than 20 feet long takes skill and practice – especially if you actually want to get a good score.

Despite the hidden challenges of each game, both are activities that make addicts out of players who catch the bug. The problem in the case of bowling is that it may be a lot harder to feed the craving as most people don’t have the space to accommodate a fully-functioning alley within their game room. 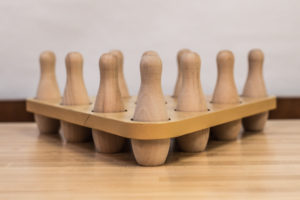 \However, bowling enthusiasts can take solace in knowing that their shuffleboard can function as an in-home bowling lane. Bowling pins that are crafted to the scale of the shuffleboard are available through McClures that can bring a table-ready ten-pin game to your game room.

Using your pucks in favor of the ball on the smooth surface of your shuffleboard table, you can go bowling without having to leave your house or put on a pair of ridiculous shoes. This could result in hours of fun, or even a nightly ritual for you and your family that takes advantage of the versatility of these finely crafted surfaces.

Best of all, by practicing at home, you’ll be ready for the next time a cocky first-timer thinks they can take you out. 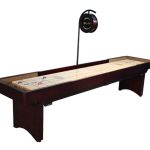 Wood Score Unit: The Perfect Gift for the Shuffleboard Player You LoveAccessories