McClure Tables was founded in 2003 and at that time the brand was used on Pool Tables sold in retail stores in Texas. My name is Todd McClure owner and I first got my start in the billiard business back in the late 70’s in Phoenix Arizona as a billiard mechanic.

I ran a retail billard store in Phoenix in the early 80’s and was so proud of the fact all the products sold were American made. We purchased pool tables from companies like Gandy, Peter Vitalie, and Play master that all were all made 100% in the USA. In the retail stores it soon got to the point the American manufactures were not building anything. They were simply importing the majority of their product line from China and putting on their brand name. So we decided if the products were all coming from China and the manufacture was no longer a manufacture but rather a distributor. Then why not go directly to China and cut out the middle man. After spending a lot of time traveling to China and developing a line of pool tables for sale in the retail store Gameroom Designs. A marketing company was hired to help us develop a brand name. So many pool table companies always used the owners last name at first I was resistant but eventually they convinced me to use McClure Tables as the brand. So in 2003 the McClure Tables copy right was first formed and the official trade mark was filed in 2007 for use on Shuffleboard Tables.

The McClure Tables brand was used on pool tables sold in Texas for several years with that brand. Eventually we closed the retail stores to focus exclusively on Shuffleboard Tables. For over four years we exported maple and polymer to China, invested over $50,000 in the specialized equipment needed to make shuffleboard tables and had an exclusive contract manufacturing relationship with some Chinese partners to make the McClure Shuffleboard tables.

In China they have a saying “Today we have wine, Today we are drunk” it is a real hand to mouth mentality. On all the frequent trips to the factories and understanding the Chinese culture. It was eventually self evident, No matter how hard you tried, no matter how much work and time you put in it was not possible to get the consistant quality standards required to put the McClure brand name on the product. With contract manufacturing and especially with off shore contract manufacturing it is difficult to say the leastÂ if not impossible to maintain a high quality standard. If the product is manufactured in China you are fighting a transient work force. The employees in China and employers do not have the same kind of relationship as in America. It is not that the factory owner or the employee takes less pride in their work. It is the fact they are only here today and tomorrow they have their own goal that does not involve this job or this factory. In the USA if an employer treats their workers right and pays them well they will be loyal, dedicated and work in the same job for several years.

In China that time period of employment is 6 to 9 months, until the next Chinese New year when the workers go home and 30-40 percent of the factory work force does not return. After four years working with my partners in a factory with 140 workers I asked his partners how many of these workers have been with you since we started. It was only a small handful less than 10 workers had been with the factory for three years. It became clear the quality standards would never be meet so the Chinese business relationship was severed. The exclusive contract manufacturing relationship was over and several other USA distributors of shuffleboards went running in.

I traded with China over a decade spent almost a total of 4 years total time in the country and can even speak and read some of the language. Today I still have some very good friends in China but we came to the conclusion four years ago to bring all the manufacturing back to the USA. We made substantial investments in the in the equipment needed to and make the shuffleboard play-field and cabinet in our own shop. To this day we are still a small shop only 5 craftsmen making every McClure shuffleboard that we build. So many of the so called shuffleboard factories or distributors who put a brand name on a line of shuffleboard tables do not build anything. They do not have a factory or make the most important part of the table the play-field as McClure Tables likes to call it the heart of the shuffleboard table.  These distributors or pool table factories at best may make cabinets and then buy boards from other contract manufactures. Only one other major manufacture in the world actually presses up their own boards and they are located in Texas.

There is one particular distributor of shuffleboard tables who claims to be a manufacture but is importing virtually all their cabinets from China and having very few cabinets made in the USA. This company may pour some polymer and may do a little final assembly in the USA but that does not give them the right to falsely advertise and represent this product as made in the USA. For this reason we have produced this video here to hopefully help warn consumers that are getting mislead. We also would like to warn other web retailers or people who carry this line on their web site. Just because you repeat a lie often enough it still does not make it true. If the distributor you get your shuffleboard tables from is making the false made in the USA claim and you also advertise it as such you too are guilty of false advertising. Read the law and rules under the FTC guide lines they are very clear what standard is required to make the claim the product is made in the USA. 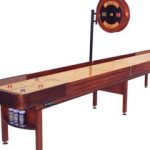 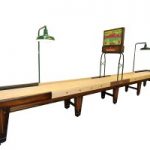