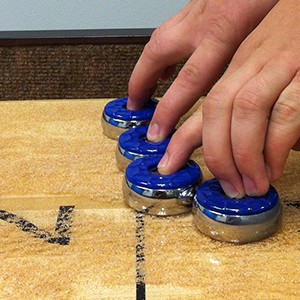 A regular shuffleboard table is generally nine to twenty two feet in length and ranges from sixteen to twenty inches wide and the object of the game is to score the most points by sliding the puck into sections designated with point values at the far end of the table. Players each have four colored coded pucks to aid in differentiating for scoring purposes and players alternate turns and can use their pucks to knock their opponents out of the scoring zones. Points are totaled with the winner being the first player to accumulate twenty one points.

Much of these rules and regulations remain the same for rebound shuffleboard, and players of one game should have no difficulty understanding what is happening and why, when participating in the other variety of the game.

However, due to the smaller footprint of a rebound shuffleboard table, there are a number of differences in how the game is actually played.

Scoring is similar for both types, but the configuration of the table is markedly different. Instead of being long and narrow the rebound version is approximately six feet in length and almost twice as wide at forty three inches. The playing surface resembles a “V” shape. 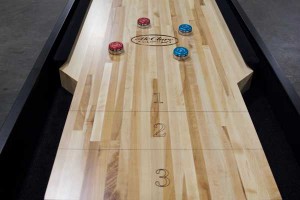 y differs in that instead of skillfully sliding the pucks in a straight line they are bounced on an angle against a cushioned side at the base of the “V” and redirected back towards the player to the scoring area. Much like in a game of pool the direction and speed at which the puck rebounds off of the cushion is determined by the liveliness, or lack thereof, in the cushion adding an additional factor into the play. 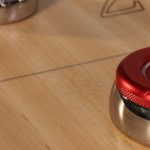 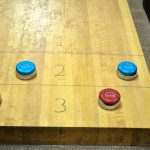