How Do You Keep Score In Shuffleboard: Target Edition 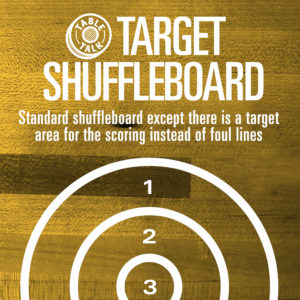 Even shuffleboard fanatics can find themselves wondering, “How do you keep score in shuffleboard?” Ah, but the reason they’d be wondering depends, of course, upon the variant of shuffleboard game in question. Knock Off and Horse Collar are the most common and well-known games, but if you want to try something different on your shuffleboard tables, we suggest Target.

The Basic Rules of Target

The basic format of gameplay for Target is similar to other shuffleboard games. Individuals can play against one another or form teams. Players play from the same end in each round. The first player throws their puck down the shuffleboard table toward the target area. The next player then throws their puck in the hopes that they will either knock off their opponent’s puck altogether, or at least land in a better scoring position. A round is complete when each player has shuffled each puck, so each player gets four turns per round. At the end of the round, the player with the puck or pucks in the highest scoring position wins. Only the winner gets points, so you have to win the round in order to score at all.

The winner gets to begin the next round, which is started at the opposite end of the table as the previous round. (This means you’ll need a target area at each end of shuffleboard tables.) The game is often played up to 21 points, but you can extend to 51 like Horse Collar if you’re feeling especially competitive.

The Scoring of Target

Playing the game is fairly straightforward, but the next question is naturally, “How do you keep score?” In shuffleboard, when playing Target, the point value depends upon where in relation to the target zones the pucks have landed. The zones of scoring are the biggest change for this game played on shuffleboard tables. To be more precise, a standard game of shuffleboard involves the long and/or short foul lines and the 1-, 2-, and 3-point lines. Target, on the other hand, involves circular targets, similar to what you would see on a curling playing surface.

Here’s a quick rundown of the scoring system:

Remember, only the pucks that are in a higher scoring area than your opponent’s pucks are added up to determine your score, and only the winner gets to keep their score. Each player gets to throw four pucks per round, so you have four chances to dominate.

The question of how do you keep score in shuffleboard is particularly useful when learning about Target, since this game differs the most from other games you can play on shuffleboard tables. If you like curling or darts, you should definitely check out Target and make the most out of your game table. Aiming for the innermost target zones is also really good practice for controlling the speed and direction of your puck. After all, the more games you know, the better for you to rule at shuffleboard. 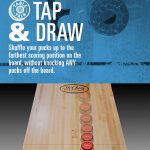 How Do You Keep Score In Shuffleboard: Tap And Draw EditionShuffleboard Rules 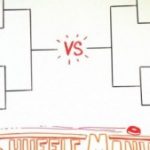