Shooting First: A Good Strategy for an Uneven Pairing

However simple a game of Knock Off may seem, when played against an expert shooter, the match becomes a game of strategy instead of a game of skill that even a novice player stands a good chance at winning. 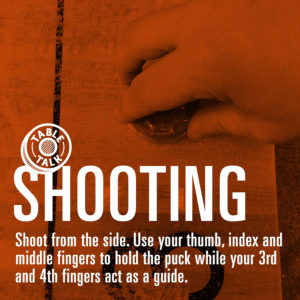 Going into the game, you may assume that your strategy should be all about getting a really high score, when, in reality, it’s more about preventing your opponent from scoring whatsoever. If you are intimidated by your partner’s shooting prowess, simply do your best to make a wall that blocks the highest scoring foul line.

In general, you will get the most advantage if you are able to be the first shooter. By getting the first shot on the shuffleboard table, you can set the stage for the entire game by putting up defenses to cancel out the back end of the table.

Aim your first weight for the center of the deuce zone, or the area behind the second foul line. When the opponent shoots, they will have to knock your weight off the table instead of surpassing it, as they are too close to the end of the alley to take the risk of overshooting your puck, and may end up pushing your weight into a higher scoring area of the table.

In return, you’ll be in position to knock off their weight when you’re up for your next shot, but with each subsequent knock off, the puck will be slightly further away from the far end of the table. After you and your opponent have each shot three weights, your opponent’s puck will be the only one remaining on the board, and, if all goes according to plan, will be somewhere in the first foul zone – meaning if they do win, they will only likely get minimal points.

Because you went first, your opponent will have the hammer, or the last shot, giving them the advantage in the final shoot out. When you go to throw your last puck before them, do all you can to aim for the third foul zone well beyond your opponent’s weight instead of trying to knock it off. This way, when your opponent takes their final shot, they are more likely to knock their last weight off the table if they aim for your final puck, which would ruin their chances of a good score. If you make a good final shot, the odds are in your favor in terms of either winning with a high score, or losing to an opponent with a low score. 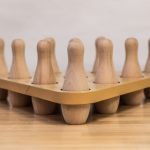