Behind The Design of Shuffleboard Weights 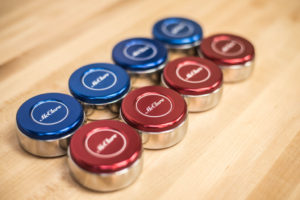 Shuffleboard weights were not always the sleek and balanced pucks you see today. The earliest versions of what would later become shuffleboard didn’t use discs at all, nor did they have the finely crafted shuffleboard tables we know and love today. We do know that the origins of the game date all the way back to 15th century England, and shuffleboard weights have naturally evolved numerous times since then.

Before there was shuffleboard, there was a little game called shove-groat. The shape of future shuffleboard weights was born out of this game in which players used coins rather than the disc shaped weights of today. These coins were known as groats, hence the name. The groats were slid across a polished tabletop for position and points. William Shakespeare even made a reference to the game in Henry IV, when Falstaff says, “Quoit (i.e. throw) him down, like a shove-groat shilling.” Shove-groat was played by nearly everyone (aristocracy and peasants alike), and gambling often ensued as well.

Shuffleboard continued to evolve into the 16th century. Although at this time coins were still being used for shuffleboard weights, the name of the game changed to shoveboard, and eventually shovelboard. The game was especially fashionable during the Tudor period. English high society played on colossal shuffleboard tables, sometimes even as long as 30 feet. These days, 30 feet would exceed regulation size. The largest McClure tables run up to 22 feet, though, which isn’t much smaller than the tables beloved by royalty.

At this point in the trajectory of the game, a more intricate system of scoring was established. Markings on the table, the precursor to today’s scoring sections, dictated how many points to award for coins that landed in certain areas. Many shovelboard games at the time still employed the use of coins, but shuffleboard weights were about to change. Some players began to replace the coins with metal weights instead. They would attempt to get these metal weights as near to the other end of the table as was possible without the weights falling off. Sound familiar?

By the early 1800s, English society had left shovelboard in the lurch. It didn’t take long, however, for the game to experience a resurgence. It was reintroduced in the mid-1800s and early 1900s, when British colonists transported the game to America. During this time period artfully handcrafted shuffleboard tables began to appear. More sophisticated tables would soon call for more sophisticated shuffleboard weights, as well.

Shuffleboard reached the peak of its popularity after World War II, when soldiers spread their enjoyment of the game all across the country. Some of the biggest shuffleboard tournaments ever held occurred at this time. The original boards were 32 feet long, even larger than the tables of Tudor, but were subsequently shortened to 28 and then to 22 feet. Up until then, shuffleboard weights were made out of heavy brass. It was at this point that they were redesigned to the smooth stainless steel models that we now use today.

Shuffleboard weights now come in two basic sizes. Regulation size shuffleboard weights are 2 and 5/16 inches in width. These are considered large pucks and usually used on tables 14 feet or longer. Medium pucks are only slightly smaller, coming in at 2 and 1/8 inches wide, and usually used on shuffleboard tables 12 feet or shorter. Particularly skilled players have also been known to use these on tables 14 feet or longer.

Most weights have a crowned bottom, but some have a flat bottom. All pucks have thumb pushoffs in the center. Modern shuffleboard weights are generally made from stainless steel with colored plastic tops. The most common colors are red and blue, although you will sometimes see other custom colors as well. Custom order caps in various colors and choose different speeds of puck bases on these shuffleboard weights here. 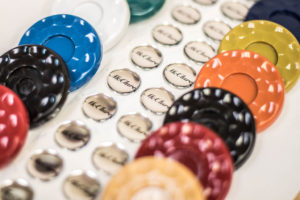 The current size and shape of shuffleboard weights is time-tested and proven to be the most efficient for gameplay on shuffleboard tables. You can grip them squarely and securely in your hand to optimize your control over where they will go on the board. While you can imagine that coins would have worked similarly, they would have weighed far less. Weighted metal pucks would prove to be the best choice for the game, and time has shown that in our current shuffleboard weights.

At McClure Tables we offer several different style of weights with different bottom points for various speeds. It is not uncommon for a player in a tournament to have several sets of weights for different game play.

The tournament specs on shuffleboard weights are between 310 grams and 350 grams for most tournament directors and regulation play. We offer stainless steel and Chrome plated puck bases all will be within the minimum or maximum weight specs. The caps all screw on for the plastic cap custom pucks if you choose stainless steel bases the weight will be between 310-312 grams. That is on the lighter side but you can remove the caps and also add some weight to the pucks. The most common way is with a penny or dime.

Screw on cap advantage or disadvantages

The caps as stated above come off and there is enough room under to add additional weight if needed. The plastic caps tend to hold tight but the aluminum hard anodized caps can vibrate in game play and become loose. You can use a thread lock to fix this problem or pipe thread tape.

We offer a variety of weights for various game boards, The majority of our pucks are stainless steel bases as the exact machining bottom pointed amount, flat or recessed speed can be more accurately machined. We offer only the .05 pointed base a medium fast speed puck in a Chrome plated version. You can customize your bases in both a plastic cap or Aluminum cap. However the stainless steel bases are lighter and the aluminum cap is heavier. So the aluminum caps on the plated puck would be over tournament weight so we do not offer the plated puck on the customize aluminum caps weight customization option here.

The poured epoxy boards are basically plastic with a thin sheet of epoxy poured over the top of the play surface and it is effectively like a sheet of Plexiglas. The main ingredient in a shuffleboard powder or wax is a plastic material so on the polymer boards you can get more static electricity and repelling of the beads that the pucks glide on. Pucks glide on the wax not the board so the trick with different bottoms is allowing the puck to slide over any potential dry spots on the board. The pointed bottom pucks work better for the polymer style boards, but the more pointed the bottom up to a certain degree the puck is faster. Once you reach the point we call 1.0 above then it actually slows down the speed of the puck. However the more pointed the bottom the better ability it has to glide over the dry spots. The disadvantage is it will wobble more so the recessed and flat pucks will be the smoothest puck.

These come standard on our black and gold aluminum cap weights. 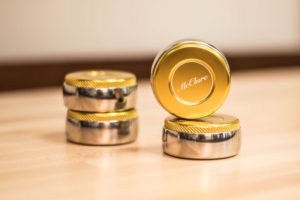 Black and Gold Caps with recessed bases minus .05 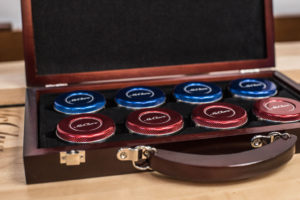 Keep in mind when choosing the perfect set of shuffleboard pucks or weights it is a personal preference.  Just as in golf there are several different types of golf clubs in a typical golfer’s bag. In fact, today, there are five categories of clubs: woods (including the driver), irons, hybrids, wedges and putters.

Shuffleboard pucks are no different for typical home play the consumer has one set of pucks and the .05 plastic cap standard shuffleboard weights will suite most players the best. 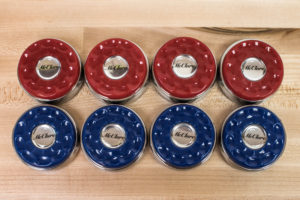 The professional player carries several sets of weights with him to a tournament and will adjust the weight not so much on his preference as to adjust to the tables he is shooting on at the tournament location. You can choose on our web site here from a variety of Shuffleboard Weights. 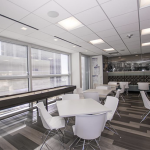 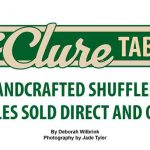