The Houston Holiday Open is one of the Top 3 events in competitive shuffleboard, according to eShuffleboard.com, an online organization dedicated to bringing the sport into the 21st century. Despite the resignation of the event’s organizer and founder Jack Scott, the show will go on at the Clear Lake City Holiday Inn on Christmas morning.

Spectators and players alike can attend the event, as organizers are aiming to make it the premier gathering of shuffleboard enthusiasts in the country, inviting previous competitors and first time participants to the annual gathering.

The Holiday Open will host 11 events over a six-day span at the recently renovated Holiday Inn, which is conveniently located near several attractions, including NASA, for players and their families to enjoy during their stay.

After the six days of competition, players will be invited to partake in a New Years Eve party sponsored by the organizers, which will feature an awards ceremony and prize giveaway.

Players will be asked to pay either a $50 or $20 blind draw upon entering the competition, which will go to a prize pot that already includes a $1,000 sponsorship from local shuffleboard hub Triple Crown Sports Bar.

As well, if you register for the event before December 15, rooms at the Holiday Inn will be discounted by almost 50 percent for those participating in the tournament.

The event will start at 7 p.m. on Christmas Eve and run through the holiday into the New Year. This is the perfect opportunity to take your family down south this winter and bond over a sport that can be enjoyed by young and old alike. We will be in Texas to visit some family and will plan to take the time to visit the Houston Holiday Open Shuffleboard Tournament. 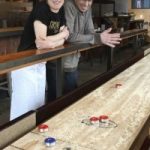