The Benefits of Using “English” When You Shoot Your Shuffleboard Pucks

Anyone who is familiar with pool or billiards understands what it means to use “English” on a ball to make a shot work in your favor. Essentially, using the cue ball, you aim for either the left or right side of a ball-in-play to make it go in the opposing direction. Truly using English requires you to aim just off the center of a ball to shoot it into a pocket that it is only a few degrees shy of being directly in line.

You can use English in shuffleboard as well, but it not only takes a lot more skill and practice, as the odds of it working against you are much greater.

In billiards, using English correctly will put a spin on the ball that sends it going in a certain direction fast and steady while constantly rotating. Skilled shuffleboard table players can use this spinning technique to get the ball that is initially struck by the cue to hit another ball-in-play, sending it in a direction opposing the rotation of the striking ball.

As well, there are bumpers on a pool table that players can use that will shoot the balls in a direction about perpendicular to the point of contact. If you can get the right amount of spin on the ball, you should be able to send it into a pocket on the same side of the shuffleboard table that the shot was taken from.

Although you can knock other weights in most games of shuffleboard, you don’t have the bumpers to work with like you do in pool. Because of this, you have to be extra precise when shooting while using English, so that you don’t overpower the shot.

For shooting pucks, you can put a spin on the weight by essentially holding it with your thumb and forefinger then twisting them away from your wrist. This will be hard to accomplish on the first try and will definitely take a lot of practice, though with time, this technique will give you greater control and a huge advantage over players who can’t shoot with English on a shuffleboard table. 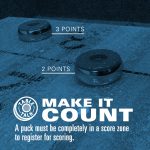 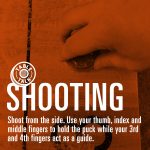