The Earliest Trials and Tribulations of Table Shuffleboard

Shuffleboard is commonly played in bars and restaurants the world over today, competitively and casually, and between players of all ages. This game is one that has always united people of different genders and classes because it doesn’t require a large amount of skill and isn’t extremely physical, although there are many competitors who would agree that it can quickly get exhausting during more rowdy trials.

When the game was actually first invented is impossible to decipher – after all, the basic mechanics of a simple game of knock-off are pretty rudimentary, and variations of this activity could go far back into recorded history. However, table shuffleboard’s origins are commonly attributed to the lively pub scene of 1600s England. Although the game was popular among those who populated the seedy underbelly of society – peasants, gamblers, thieves – it wasn’t simply an activity for paupers. The aristocracy saw the value of the shuffleboard as a great way to not only kill time but to engage in politics. Although it isn’t known if any wars were won or lost over a round of Horse Collar or not, it can be assumed that this game definitely broke the ice among rival countrymen after a few dinner gatherings.

Many believe the aristocracy actually created the earliest tables that were dedicated entirely to playing shuffleboard. While the lower classes had the dimensions of their playing lane determined by the length of the bar they were playing on, noblemen were the first to establish the official shuffleboard dimensions that the master woodworkers at McClure Tables build their shuffleboards to.

The original name of the game that was played in the British Isles was “shove groat,” a term that would endure for some time. In fact, William Shakespeare made reference to shove groat in his masterpiece Henry IV, when Falstaff declared, “Quoit (throw) him down, like a shove-groat shilling…”

The term quoit has endured from its old-English roots in reference to the weights that are used in both table shuffleboard and the version of the game that is enjoyed on courts.

This activity was extremely popular among the Tudors – one of the more storied royal families – who would frequently play the game on shuffleboard tables as long as 30 feet. While this exceeds regulations by today’s standards, competitions still take place on tables as long as 24 feet in many cases. However, as much as King Henry VIII enjoyed shuffleboard, he reportedly banned the game, along with other recreational activities, for the peasants and underclass so that they could focus on more productive things and spend less time in the crowded bars and pubs of London.

Of course, shuffleboard prevailed, and remains popular not just in England, but all over the globe. 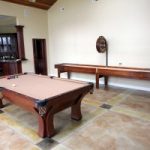 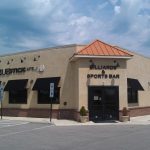