Fishbowl Inventory, a private company based out of Orem, Utah that deals in inventory control solutions, is the latest office to add shuffleboard tables to their workday mix. “We’ve been having ongoing shuffleboard tournaments,” says Grant Kimball, VP of Partner Relations. “Everyone’s just getting really on board with it.” Read on for some of Grant’s insights into shuffleboard tables at the office and how their particular company has adjusted to the newfound presence of a shuffleboard table.

Did you think about getting some other type of game table before deciding on the shuffleboard table?

Actually, we’ve got a pool table, and so you know, we do have about 100 employees here, so we’ve got a game room with a pool table and ping pong table, and we just got a pinball machine, and by far, the one that’s the most popular is the shuffleboard table.

What made you start setting the tournaments up, and how did you decide on the format?

We’ve got a lot of self-starters here at work, so one of the guys thought it would be kind of fun, because everyone goes back there and they’ll compete against each other. So to make it more organized, we decided to set up a tournament. He found the format online somewhere, and we have at least half the company competing! We’ve only had this table for a couple months and we’ve had three tournaments so far. 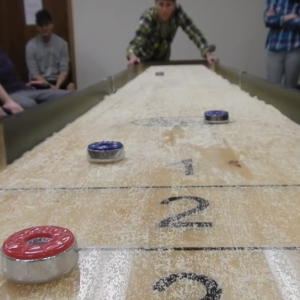 Has the shuffleboard boosted morale or productivity?

I think having the games around helps out, but one of the good things about shuffleboard is that anybody can play. You get it, you understand what you’re supposed to do in two seconds, but then to get good at it, it takes some practice. Like in the video, Whitney, our assistant sales manager, she killed the guy who was in second place.

It’s exciting that the underdog can come out on top.

It’s just that anybody can play and it’s an easy game to play. Some games, like pool, it takes longer to get good at, or at least to even get decent at. Shuffleboard, you can figure it out quickly. Anybody can jump on board. A person whose first game was an hour ago can still play in a tournament and have a good time.

Do you feel that playing shuffleboard helps to foster a sense of togetherness amongst the employees?

A sense of togetherness, yes. One thing it does is it gets people introduced to others that they might not otherwise talk to. I’m one of the owners of the company here, and when I started there were 4 of us. As we’ve grown, it’s like every week we get somebody new here, and I don’t know who they are. But with the tournament, you’ll be paired up to play against somebody maybe you haven’t even met yet. So you can joke around and have a good time and get to know people you might not otherwise get to meet. 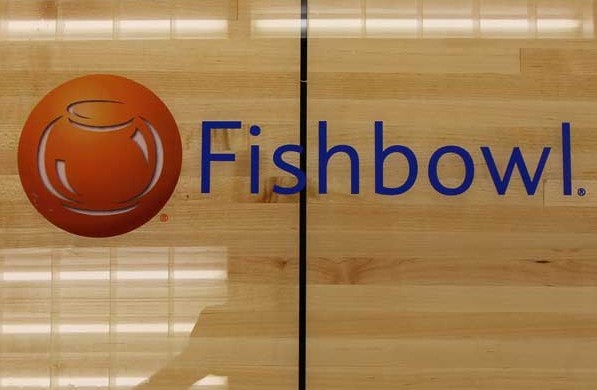 Yeah, it’s great. It’s just a really good game for getting acquainted and building morale at a company. Everyone likes to tease and joke around, so that’s kind of what we do. For me, that’s 90% of the fun, just being able to joke around and tease the other guys, even though you get your butt kicked.

Shuffleboard tables: the great equalizer! As Grant noted, the fact that anyone can quickly learn the rules and get involved in a game is one of shuffleboard’s most attractive qualities. The simplicity and camaraderie in Grant’s words, make having a shuffleboard table at the office a blast. Whether you get organized and set up tournaments like the fine folks at Fishbowl, or engage in casual gameplay to break up the workday, shuffleboard tables and the office are a winning combination. 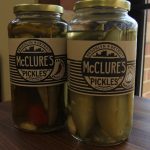 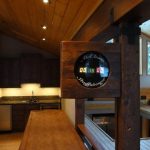