The Story Of The Underwater Shuffleboard Tournament 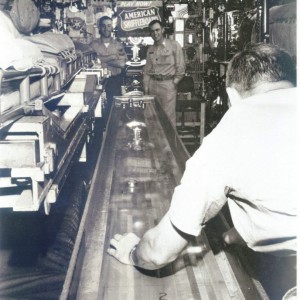 In the late 1950’s, the US Navy Officer and Chaplain of the USS Theodore Roosevelt contacted Sol Lipkin, the era’s most prominent salesman of shuffleboard tables. Sol’s expertise would prove to be supremely valuable in getting a shuffleboard table installed in the submarine.

The idea behind the table was to offer the crew a chance to do something competitive in-between missions. As you might be able to imagine, long days are that much longer when they are spent entirely underwater. The crew had plenty of movies to watch, but the Chaplain wanted to provide them with a more engaging activity. With a shuffleboard table, they could scratch the gaming itch tenfold by conducting a shuffleboard tournament.

The submarine was sent from Connecticut to South Carolina to be outfitted for naval use, so the shuffleboard installation became part of the outfitting process. The table itself was installed down the hatch, on the steel structure of the torpedo rack. In order for the table to be at the correct height for play, the legs had to be drastically shortened.

It’s a 21-point game, and the score is 20-20. Picture the Captain posed and ready to strike, hammer in hand. His opponent throws a weight that only makes it past the short foul line. The Captain is grinning, for he knows that a swift victory is in his hands. He only needs one point to win the shuffleboard tournament, and it should be a piece of cake, right?

As only a bizarre coincidence would have it, the submarine tilted at just the same moment that the Captain made what should have been a game-winning shot. As the hammer slid down the table to surpass the short weight, the tilting submarine caused it to fall into the gutter instead! (Fun fact: the Navy crew had their own name for the gutter. They called it the rough, and it must have been pretty rough on the Captain indeed.)

As a result, the two opposing crew members won in quite a ridiculous way; without the hammer, and with only a short weight on the board! As shuffleboard tournament champions go, these winners were especially lucky. 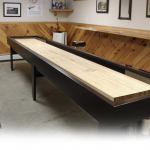