For beginners looking to start playing the game of table shuffleboard, it can be a confusing process to learn all of different rules and intricacies from watching others play the game. However, the basic table shuffleboard rules are simple to pick up and understand so that everyone can play their first game! 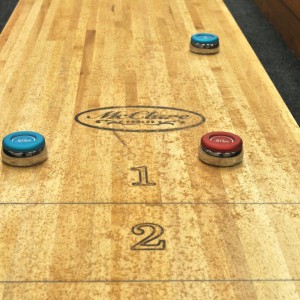 Although there are various different versions of the game, there is a general set of table shuffleboard rules regarding the game play that most people follow, beginning with which player goes first. In most cases this is determined by the flip of a coin. In a two player game the participants, standing squarely at the same end of the table, take turns shuttling the pucks to the opposite end of the table. The game continues in this fashion until no pucks remain.

There are foul lines that must be adhered to when playing. On the player side, you cannot cross the near foul line while the puck is still in your hand. On the scoring side, the puck must cross the far foul line in order to be eligible for scoring. If the puck does not go past the short or long foul line (in Tournament Play depending on rules of director) the puck is immediately removed from the field of play in order as to not obstruct the next player’s shot. If the puck goes beyond the end of the playing surface, or if it falls off to the side into the gutter, that puck is not counted towards the score.

Scoring is determined by the point value given to the numbered zones on shuffleboard tables with points awarded only to the player that has the puck(s) deepest into the scoring area and beyond all the other player’s pucks. A puck that hangs over the end of the playing surface, but does not fall into the gutter, is called a “hanger” and is awarded an additional point. Only one player is able to score per round.

The subsequent round is performed in the opposite direction alternating ends until a player reaches either fifteen or twenty one points, depending on your game version. This winning point total should be determined prior to the start of play to avoid argument!

After the initial coin flip, the player who scores the most points in a particular round begins the subsequent round.

There are a variety of offensive and defensive strategies allowed within the table shuffleboard rules, which you will learn and pick up as you play more regularly. Offensively, placing the pucks further apart may give you an advantage or conversely stacking them closely together may prove more advantageous, depending on your opponents skill level.

As part of the defensive strategy of play, it is permissible to knock the other player’s puck from the playing surface to gain an advantage. The same rules that apply to a scoring shot, regarding the foul lines, pertain to this defensive play strategy. Bumping the table or touching the pucks with the hand after they have been played, and are in the legal field of play in order to effect the positioning of the pucks, is not permitted.

With these simple rules in mind, you should know understand enough of the game to play, have fun, and improve your skill level! 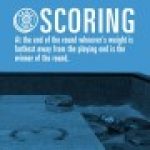 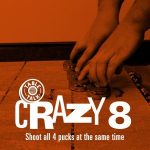